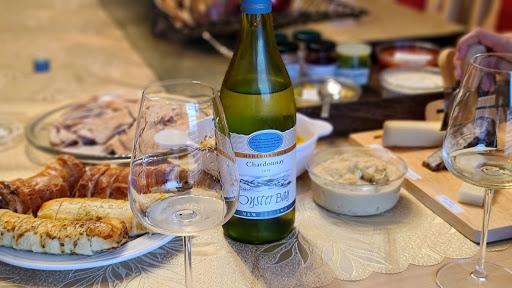 An Evening of Chardonnay & Cheese

This week we decided to try some cheeses from a local artisan cheese shop and do a pairing with a light bodied chardonnay from New Zealand. I was surprised to find that there are so many flavour profiles that the different cheeses and food pairings brought out from the wine. I assembled a board with the following types of cheeses: Comté (France), Cave-Aged Gruyere(Switzerland), Smoked Gouda(Canada), Guinness Cheddar(United Kingdom) and Honey & Hay Pecorino(Italy).

What stood out to me in particular from this cheese tasting was the Comté cheese. The Comté we had was aged 24 months. Comté is a french cheese made from unpasteurized cow’s milk in the Franche-Comté traditional province of Eastern France bordering Switzerland. This semi-creamy cheese complemented the chardonnay we were having so well. The richness of the comté enhanced the cheese board, and balanced out the sharp, crisp taste of the chardonnay wine.

The Cave-Aged Gruyère was comparable to the Comté but you can definitely tell that this cheese originated in Switzerland. It has a distinctive sharp “swiss” flavour that does not leave a lingering aftertaste in your mouth. To be specific, this cheese originated in the Cantons of Fribourg in Switzerland. Cave-Aged Gruyère is made from unpasteurized cow’s milk just like the Comté. Same as the Comté, the Gruyère is categorized as either an Alpine or Swiss cheese. Having this texture on the cheese board, gave it more depth during the wine tasting.

The infamous Gouda is always one of my top choices but during this tasting I still believe Comté was the winner. Traditionally, Gouda comes from either pasteurized or unpasteurized cow’s milk from either Holland or the Netherlands. However, the one we tried was a local BC Smoked Gouda. The smell of this Smoked Gouda was very intense and the taste alike. A bit overpowering for our light bodied Chardonnay but this cheese would be a great addition to a fuller bodied wine! Also, this is a great cheese to enjoy on its own or with some salted crackers and a spicy jam.

This was my first time trying Guinness Cheddar and I was definitely not disappointed. This cheese was bold and malty with the distinct “Guinness” taste. For those who are not familiar with Guinness, it is a dark beer from Ireland. From the smell and texture all the way to the taste, the entire experience of this cheddar was incredible. I felt a hint of coffee as I had this cheese and absolutely enjoyed this. I was surprised to find that this cheese worked well with my Chardonnay wine pairing.

Pecorino is a hard cheese that comes from Italy and is made from Sheep’s milk. This cheese was beautiful and covered in hay and infused with honey. This cheese had some earthy tones with a light touch of honey. This pecorino complemented our Chardonnay very well. The nuttiness of this cheese toned down the acidity in our wine and cleansed our palate for us to enjoy more wine.

Altogether this tasting was a great success! We had a wonderful time pairing the different cheeses with our New Zealand wine. In my opinion the Comte and the Cave-Aged Gruyere were tied as the winner. The beauty of cheese and wine pairings is that each cheese brings out different flavours of the wine and we all have our own preferences. I am looking forward to doing another tasting with other cheeses from around the world during my next tasting. Stay tuned and try along with me!